Leigh Turner talks about the Importance of Turkish

Leigh Turner CMG is the Director General for Trade and Investment Turkey, Central Asia and South Caucuses. He is Her Majesty’s Consul General in Istanbul

UKTI promotes and works together with British businesses abroad and encourages best practice.

Could you tell us just a few words about how you arrived in Istanbul and your current role?
Well thank you very much, Neal, I’m delighted to talk to you about Istanbul and about the Turkish language. I have been in Turkey now for two and half years, I arrived in Istanbul in the summer of 2012. My previous role was as ambassador in Kiev, Ukraine. My role here in Turkey is, as you say, Consul General for our quite large mission here in Istanbul and also as Director General for UKTI Turkey, Central Asia and South Caucuses. We’re trying to help British businesses who want to do business in Turkey and, of course, Turkish businesses who wish to do business in the UK.

You can speak Turkish, how did you learn the language?
Well, as soon as I heard back in early 2012 about the job here in Istanbul, I went straight away to the Foreign Office Language Centre and I borrowed some online software to help me start to learn Turkish and I ploughed straight into it – by myself. In the six months before I arrived in Turkey I spent a lot of time on the Internet, 127 hours in total. I had a couple of lessons with a very nice Ukrainian person who was a Turkish language teacher. So by the time I arrived in Turkey, in early August 2012, I could speak a little bit of basic Turkish.

And you have continued the language learning since?
Since I arrived in Turkey, I have been having one or two lessons every week. I had five weeks of full time language learning before I arrived in Turkey – sorry before I started working – I was actually staying in Istanbul during that time with a family in a suburb of Istanbul which was very helpful. Then, along with the additional lessons, I tried to watch TV, listen to the radio and to speak Turkish to people and I tried to build up my level of fluency.

Perhaps you never thought about learning Turkish until you had prospect of working in Turkey but now that you know Turkish could you describe the language in a few words?
I think it’s a beautifully rich language, it’s full of idiosyncratic idioms and expressions from across the Middle-East. The language incorporates aspects of Farsi, which is the language spoken in Iran, a lot Arabic, quite a few French words and of course quite a few expressions of original Turkish origin! For example, the expression “looking forward to something”, dört gözle bekliyorum, means literally I’m waiting for it with four eyes – which is very colourful.

What was one of your most memorable moments with the language?
Well very early on when I was living in Baltalimani, I was walking to my language lesson which was in Etiler and I went through a part of Istanbul which is called Bebek (and Bebek also means a baby in Turkish). I wanted to get my haircut and I saw a place called kuaför – which is obviously a French word (coiffeur) – and I thought, well, that must be a hairdressers so i went in but I found it was only for women. So, clearly, that wasn’t the one for me! Then I went out and looked around again and saw Erkek kuaför. Now, an erkek in Turkish means a boy. So I thought that’s obviously a children’s hairdresser – I won’t go in there. And then I saw another one which said Bebek kuaför and I thought, wow, a hairdresser’s for babies …

I can see where this is going! 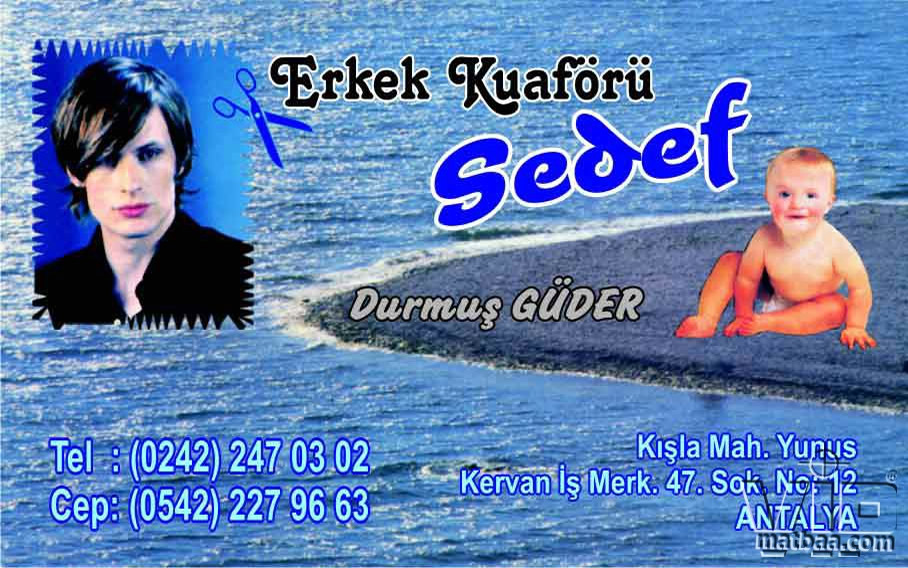 … you know, this is extreme! This must be a really upper-class area. Only later did I discover that erkek means not only boys but it can also mean male, or “men’s” so the Erkek kuaför was actually the men’s hairdresser and of course the Bebek kuaför was obviously named after the district not the babies so I could have gone into either the last two!

(Example of Turkish design perhaps responsible for the confusion! From badturkishgraphics.com)

Incredible! And when you are speaking Turkish on the street and with people, is that well appreciated?

I find it enormously rewarding to be able to communicate with people in their own language – even with people I know very well, I find that as soon as we are having a conversation in Turkish, the quality of the conversation is completely different. People are much more willing to say what they really think and they are more comfortable in their language. That is true in Turkey as in any other country.

The British Embassy, UKTI, the British Government, The EU and Chambers of Commerce are all actively encouraging an engagement with Turkey. The Americans consider Turkish to be a language of ‘critical importance’. Has there ever been a better time to learn Turkish?

Britain sees Turkey as an important country both for its geostrategic location in between the Middle East and Europe and because it’s a secular country with a Muslim majority which is stable and democratic. It’s a fast, growing economy with a fast, growing population with a young demographic. We would expect it to continue to grow over the next 20 to 50 years. Indeed the British economist, Jim O’Neill, who invented the expression the BRICs, has put Turkey in another group called the MINT countries, that’s Mexico, Indonesia, Nigeria and Turkey which he expects to be going up the rankings of world economies. This gives us huge potential and, in my view, the Turkish language is going to be really important for people who want to do business with Turkey and of course it’s going to help you learn some other languages of Central Asia including Kazakhstan, Turkmenistan, Azerbaijan, all having languages that are recognisably similar to Turkish.

Yes I have been to most of them and, in fact, the one whose language is closest to Turkish, Azerbaijan, I was recently there in Baku and I was able to have a perfectly reasonable conversation with the Taxi driver on the way from the airport into town. Some of the other countries, like Kyrgyzstan or Kazakhstan, have languages that are even quite difficult for a Turkish person to understand but knowing Turkish would help you to learn them if you wanted to do that.

With the growing economy of Turkey and the expectations that Turkey will be in the top ten economies of the world within a few years, the Department for Business, Innovation and Skills aims to double its trade with Turkey. How important will Turkish be to achieving this goal?
I think there is no doubt that Turkish will be very valuable in the future for people who wish to do business in Turkey and make the most of Turkey’s growing opportunities.

I don’t think that people would be worried by the fact that Turkish is ‘considered difficult’. As with any language, we can quickly learn some basic phrases which will ensure you a warm welcome when you get to Turkey and indeed during my first six months of learning, nobody told me that it was a “difficult language” and I didn’t notice! It does pose some challenges but I enjoy learning it immensely and I’ve found it very useful for talking to businesspeople, political people and nearly everybody.

If you were advising a current college student who isn’t too sure what to do next or someone looking for new opportunities, how could learning Turkish help their careers?
Anybody who wants to connect with Turkey would do very well to learn Turkish. I think there is going to be increasing trade between Turkey and the UK. To get inside the minds of the people you are dealing with, to break down barriers and to get closer to people, it will always be useful to speak the language and I would certainly encourage young people to think very seriously about this beautiful and valuable language in their learning programs.

Presumably there would be a lot delight from the Turkish people – and yourself – to see more British People speaking the beautiful and fascinating language?
Yes, they do welcome that. Turks are very interested in what other people think of them and they are very delighted when people take an interest in Turkey.

I cannot say I am as fluent as I would like to be but I can hold a reasonable conversation now and I can discuss some technical issues and I find it enormously rewarding to speak to Turkish people from all walks of life.

Some conclusive reasons to learn Turkish! Anybody wishing to read more on what you have to say can read your blogs on the FCO website and follow you on twitter where you have chronicled a staggering 300 reasons to like Istanbul.
That’s right. I would encourage your audience to follow me on twitter. My Twitter handle is @LeighTurnerFCO and, yes, I have tweeted out well over 300 #reasonstolikeistanbul!

Thank you very much!
Thank you, Neal, good luck with the project and let’s hope we can get more people speaking Turkish!

HandsOnTurkish is an EU-funded Turkish language course and app for businesses dealing with or in Turkey and aims to prepare learners linguistically and culturally, to mitigate costly errors and increase the chances for success.

Thank you for visiting HandsOnTurkish.com. Our award winning interactive courses of Turkish have been developed for anyone with a genuine interest in the Turkish language and Turkish culture, whether for private, educational or professional reasons and are specially designed for self-study. Our website and our language courses are free from advertisements and we don't share any personal details of our visitors or registered members with third parties. Nor do we sell data for targeted advertising. We believe passionately that learning should be free from commercial distractions. For this reason we rely on subscriptions to fund the development of our products. Click here to find out more about our online Turkish courses.